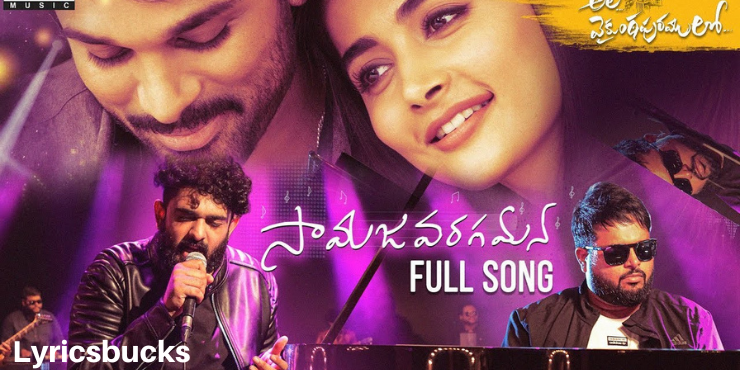 Listen to this song on youtube  from here https://youtu.be/Thf60JU8E98

Presenting Samajavaragamana Song lyrics in Telugufrom the movie Ala Vaikunthapurrumuloo. The singer of this song is Sid Sriram and music is composed by Thaman S.The lyrics of this song are penned by seetharamasastry garu.

The Movie : Ala Vaikunthapurramuloo

Ala Vaikunthapurramuloo movie cast: Allu Arjun, Pooja hegde,Tabu, Jayaram.In director Trivikram Srinivas’s Ala Vaikunthapurramuloo, the protagonist Bantu(Allu Arjun) hails from a  middle class family. He has a doting mother, an affectionate younger sister and a forever nagging father. The set up of the film is very similar to the director actor duo’s 2012 movie Julayi.

In Julayi Ravi’s father constantly nagged him as he was genuinely worried about his son’s future. But Bantu’s father Valmiki(Murali Sharma in tope form) has sadistic reasons behind the way he behaves with his son.

Trivikram has taken inspiration for Ala Vaikunthapurrumuloo from Ramayan. It is clear from the names of the characters in the movie. Valmiki for example is considered as the author of epic Ramayan. It is Murali Sharam’s Valmiki, the most ill-willed and immoral character in this drama, who sets the ball rolling. The story begins when Valmiki cruelly alters lives of people around him.

Samajavaragamana Song lyrics in Telugu ends here, hope you will like this song and the lyrics that we are provided are interesting and as well as helpfull for you.If you like this song lyrics then, please comment via comment section. Read also other song’s lyrics from here-