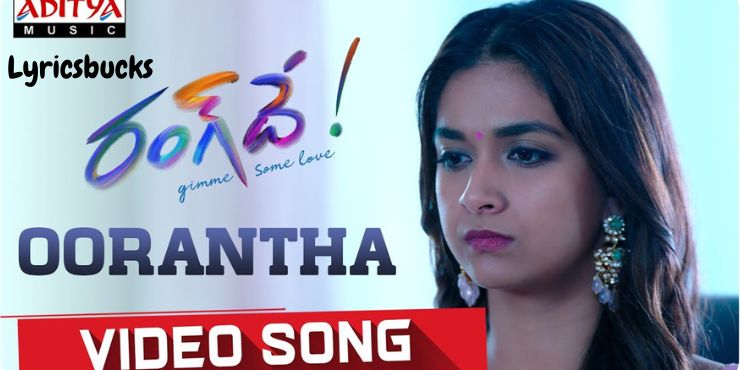 Listen to this song on youtube from here https://youtu.be/txjwwsJ9PWI

Oorantha vennela song lyrics in English from the movie Rang De : The song is sung by Mangli, Lyrics are Written by Sri Mani and the Music was composed by Devi Sri Prasad. The song Starring by  Nithin, Keerthy Suresh.The music of this song labeled by Aditya music.

The movie Rand de is one of the best Telugu movies. Nithin And Keerthy Suresh are the most famous actors of telugu movies. Keerthy suresh is most beutifull actress. Her acting attracts the viewers eye.

You shouls watch full song video on youtube and enjoy the song’s music and loving scenes. In this post Oorantha vennela song lyrics in English given above. Read the lyrics ,may you like this article.

About The movie “Rang De”

The movie released on 26 march 2021. Rang De is a romantic comedy family entertainer movie directed By Venky Atluri. The movie casts Nithiin and Keerthy Suresh are in the lead roles along with Naresh, Kausalya, Rohini, Brahmaji, Vennela Kishore, Abhinav Gomatam, Suhas, Vineeth, Satyam Rajesh, Gayathri Raguram and many others are seen in supporting roles. The Music composed by Devi Sri Prasad while cinematography done by P. C. Sreeram and it is edited by Naveen Nooli. The film is produced by Suryadevara Naga Vamsi under Sithara Entertainments banner.

The story of the movie given here. Hope you will definately like this.

Arjun (Nitin), Anu (Keerthy Suresh) are childhood family friends living next door. If Arjun is the average in education, Anu will always be the top scorer. Under such circumstances, friendship, love and hatred between the two of them continue. However, Anu’s mother (Rohini) is reluctant to go abroad for higher studies and arranges marriage. Unable to kill love on Arjun and to get married against her will from the wedding, she married to Arjun. Dissatisfied with the order of marriage without his involvement, Arjun goes to Dubai with Anu for her higher education.
What happened between Arjun and Anu who went to Dubai? How did their turf go in Dubai? Under what circumstances does Anu become pregnant? Why do Anu want divorce from Arjun after getting pregnant? What decision did Arjun make to compromise with Anupama who was ready for divorce? Rang De is the answer to all the question as to why Arjun suddenly fell in love with Anupama, who had been feeling the same way till then

Other usefull ddetails of the song are given here-