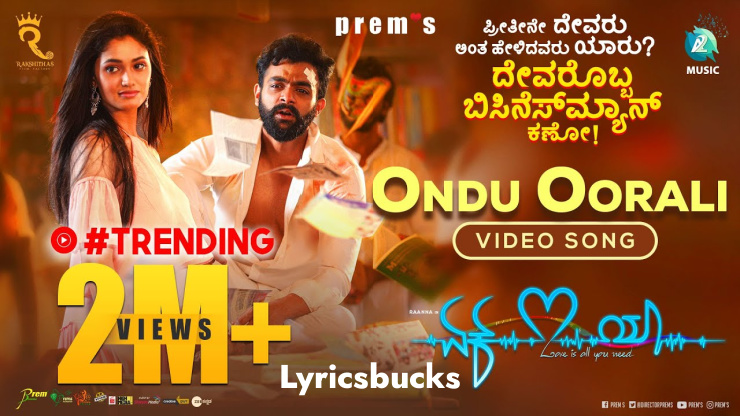 Listen to this song on youtube from here https://youtu.be/wX6ws30ZWnI

Ondu oorali song lyrics in English is a Kannada song from the Movie : Ek Love Ya .Song Ondu Oorali  Banner by  Rakshithas  . The singer of this song are fmous Kannada Singer : Shankar Mahadevan and Lyrics  are penned by Sharanakumar Gajendragada .

Starring of Ondu Oorali song by Raanna, Rachita Ram, Reeshma Nanaiah .The  Music of this song composed by  Magical Composer Arjun Janya  and Dop : Mahen Simmha . The song Editor  was Srinivas P Babu . Ondo Oorali song directed by  Showman Prem’s  And the Producer of this song is Crazy Queen Rakshitha Prem . Choreography by Kalai.This romantic song is most beutifull.

About the movie ek Love ya

Ek Love Ya is Indian Kannada-language romantic action film written and directed by Prem and produced by Rkshita under the home banner Rakshita Film Factory.The film features Rakshita’s brother Raanna as the lead, Reeshma in their debut. It also features Rachita Ram, Arjun Janya was hired to compose the music while cinematography and editing is handled by Mahendra Simha and Srinivas P Babu.Ondu oorali song is one of the best song of this movie.

Although initially anticipating to release in early to mid 2020, Prem has delayed the release due to health issues of Janya and the Covid 19 Pandemic in India  It was rescheduled for 21 January 2022, but was postponed again to 24 February 2022.

Other related information about the song Ondu oorali song lyrics in English given below . Let’s check out-