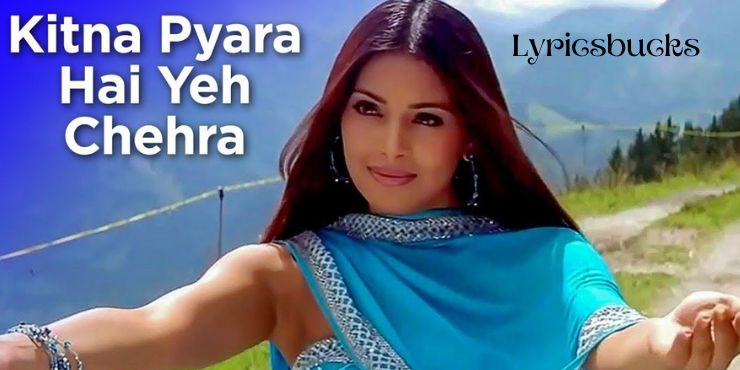 Listen to this song on youtube from here https://youtu.be/w7Gl3A-1rWM

Kitna pyara hai ye chehra is  most beutifull and lovely song from the most famous hindi movie Razz. This song is sung by  most popular Singers of hindi songs Alka Yagnik & Udit Narayan . The Music Director of this beutifull song is  Nadeem Shravan . The song Kitna Pyaara Hai Yeh Chehra song | Razz Lyrics in English Lyricist by Sameer .The most famous Movie Razz and the song kitna pyra hai ye chehra is  Produced by  Tips Films & Mahesh Bhatt and the  Director odf this song is Vikram Bhatt .The Cast by Bipasha Basu, Dino Morea, Malini Sharma & Ashutosh Rana.

The lyrics of this beutifull song Kitna pyara he ye chehra is most favourite of people and i really like this lyrics.

The song has very beutifull , heart touching and peaceful voice that gives relax and enjoyment to a person. Old hindi songs music are amazing and able to listen.

The starcast Bipasa Basu is a famous actress of those days.The movie Razz Released on 2nd february 2002.

You should watch full song video on youtube and enjoy the music and feel the love. In this post Kitna pyara hai ye chehra song lyrics are given above in English language. Read full song lyrics . Hopr you will like this beutifull song .

The movie “Raazz” is very beutifull  hindi movie . About this movie you can read ahead .

About the Movie “Raaz”

Raaz (Secret) is a 2002 Indian Supernaturalhorror film directed by Vikram Bhatt. The film stars Bipasa Basu in the lead along with Dino morea and Malini Sharma. Aditya and Sanjana as a couple who have moved to Ooty to save their failing marriage. However, what they find in their new home is more than they expected when a ghost starts haunting the place. The wife, Sanjana, suddenly finds that her husband is part of the ghostly conspiracy, which she must fix to escape. The film is an unofficial adaptation of the Hollywood film What lies beneath (2000).

Kitna pyara hai ye chehra is a special song of the movie Raaz.

It was the second-highest-grossing film of the year 2002 being the most profitable venture and the first instalment in the Raaz. Its background music(BGM) was the major factor its success, edited by Rao and Uday Inamati. Basu’s performance was highly praised and earned her a Best Actress  nomination at the 48th Filmfare Awards. Nadeem-Shravan’s music also earned them several nominations at prominent Indian award ceremonies. A sequel to the film was released on 23 January 2009, under the title of Raaz : The mystry continues and the third installment of the series titled raaz 3 was released on 7 September 2012. A fourth film, Raaz reboot, was released on 16 September 2016.

The music of Raaz was composed by the duo Nadeem-Shravan while the lyrics were penned by Sameer. The album was a chartbuster of 2002 with its songs gaining popularity. Tracks like “Aapke Pyaar Mein”, “Jo Bhi Kasmein Khayi Thi”, “Yahaan Pe Sab Shanti Shanti Hai” and “Main Agar Saamne” became a rage soon after the release and were observed being played in almost all wedding and celebrations. The songs got international acclaim and were even appreciated by PaulMc Kartney of The Beatles.

Other usefull details of the song Kitna pyara hai ye chehra in which you might be interested are given here.