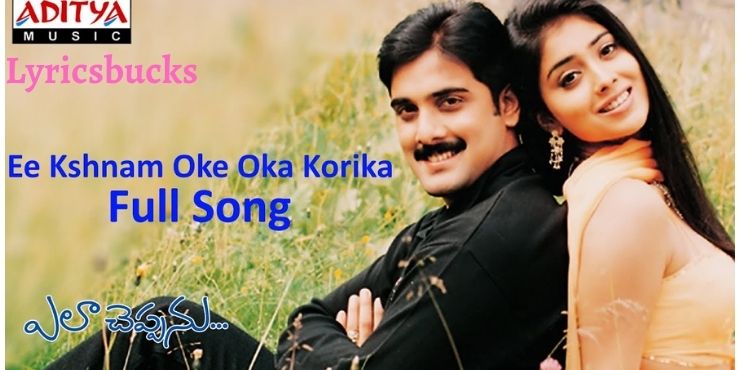 Listen to this song on youtube from here https://youtu.be/2b1u6kfRqiQ

This song is produced by Sravanthi Ravi Kishore and directed by Raman B.V.. The lyrics of the song Ee kshanam oke oka are penned by Sirivennela sitharam Shastry.The song stars are Tarun, Shreya , Saran, Sunil, Brahmanand, Kovail Sarala Among others .

Now you are excited to know about the movie Ela Cheppanu

Ela cheppanu ( How should i say) is a 2013 indian telugu language film starring Tharun , Shriya and Vijayachandra . The film was directed by B.V . Ramana. It is the remake of the Bollywood film Tum Bhi.

After Amar verma’s (siva balaji) accidental death in india, Germany based VArma industries is on the verge of collapse. Priya (Shriya saran) Amar’s fiance is devasted , Amar’s dad ( Vijaychandra) is in shock and unresponsive towards others while Amar’s sister ( suhani Kalita) and grandmother (Sowkar Janaki) are in mourning . Inspector who is investigating the case is determined  to find the person responsible for the accident despite his superior’s indifferences towards the case.

The music and abackground score was composed by Koti. The soundtrack album consisted of 8 tracks. The song

“Ee Kshanam ” sung by K.S. chithra became an evergreen song topping the charts , ” Prati Nijam” . “MagamasaVella”, “Aa Navvulo” & “Manninchu oo Prema” were other hits from the album. All the lyrics were written by Sirivennela Sitarama Sastry.

Other intersting details of the song are given below-

Ee kshanam oke oka korika lyrics in English ends here. Hope you will like this song and the song lyrics are interesting and usefull for you.