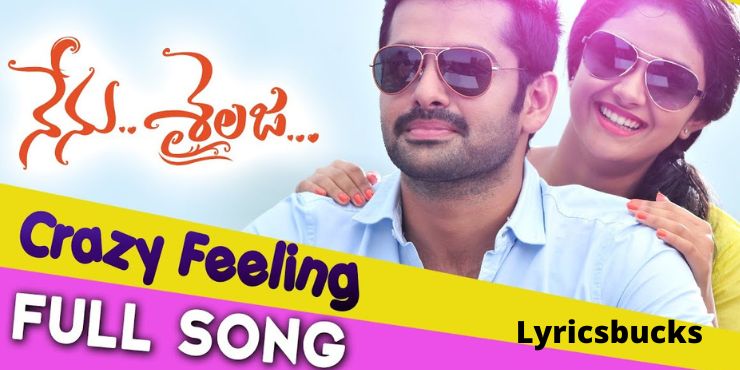 Listen to this song on youtube from here https://youtu.be/QCTtc36u-Kk

This romantic song is sung by Prudhvi Chandara and the lyrics of the song Ramajogayya Shastry . This song is directed by Kishore Tirumala. The music directtor od the song is Devi sri prasad.

About the Movie Nenu Sailaja

Nenu sailaja ( Me and Sailaja )  is a 2016 telugu language romantic comedy film directed by Kishore Tirumala and produced by Sravanthi Ravi Kishore , starring Ram Pothineni and Keerthy Suresh. The film was produced by Sri sravanthi movies which also produced Ram’s previous film Shivam. It was released on 1 january 2016. Music was composed by Devi sri prasad and released by Aditya Music.

Crazy crazy feeling is a beutifull romantic track of this movie. In the movie Hari is a happy go Lucky Dj from his childhood , HAri used to prupose to every girl that he came across but was turned down every time . He lives with his parents and twin sister Swecha. He still tries to woo every girl he cncounters but fails . To overcome this depression he sits with his best friend by the lighthouse in Vizag beach.

Hari in an inebriated condition is about to fall into the sea. But he is a saved by Shailu . HAri asks her to drop him home as he has no money or vehicle to get home. Shailu offers lift but drops him in the middle as she thinks he is trying to woo her  and even does’t tell him her name when asked by har. He then tells his friend that if god exists he will never meet her again.

To know about full story of the movie must watch full movie and watch full song also.

Other details of the song are given below-

Crazy crazy feeling song lyrics in English ends here. Hope you will like this song and the lyrics of the song are interesting and usefull for you.