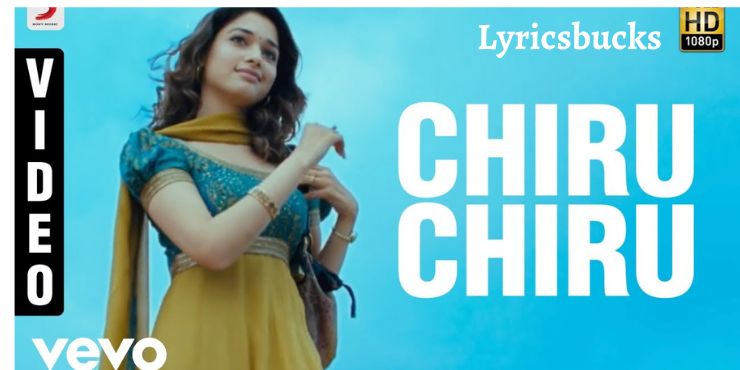 Listen to this song on youtube from here https://youtu.be/hCt-H4-5wco

Song  Chiru Chiru from Tamil Movie  Awaara . The Singer of this beutifull song is Hari Charan & Tanvi Shah . The Music of this song is given by  Yuvanshankar Raja .Lyrics are penned by  Chandrabose . The song is Directed by N. Linguswamy.Starring of this song Chiru chiru chinukai by Karthi  and Tamannaah. The song  Producer is Subash Chandra Bose from the  Studio – Studio Green Productions, Thiruppathi Brothers . This song’s Music Labeled by Sony Music Entertainment India Pvt. Ltd.

CHIRU CHIRU song lyrics from the movie Awaara. This song is sung by Hari Charan & Tanvi Shah, lyrics are Written by  Chandrabose and the Music is composed by Yuvanshankar Raja . Starring Karthi, Tamannaah.

About The movie Awaara ( Paaiyan)

Paiyaa (Boy) is a 2010 Indian Tamil-language action adventure film written, produced and directed by N. Linguswamy. It stars Karthi  and Tamannah, with Milind Soman , Sonia Deepti and Jaganappearing in supporting roles. The film, produced by N. Subhash Chndara Bose under the banner of Thirupathi brothers and distributed by Dhayanidhi Alagiri’s Cloud Nine movies,  features a film score and soundtrack composed by Yuvan Shankar Raja, cinematography by Madhi and editing by Anthony Gonsalves. Chiru chiru chinukai song lyrics in English is one of the best song of this movie.

In the film, a young woman is driven from Bangalore to Mumbai by a jobless young man who must evade gangsters chasing after them, as well as confront his own violent past in the city. Following a lengthy pre-production phase, during which the film underwent major changes in its main cast and its technical crew, it began shooting in December 2008 at various locations throughout South India, most notably in Karnatka , Andhra Pradesh and Maharshtra.,

Paiyaa was released on 2 April 2010 to positive reviews and was commercially successful. The film was remade in Bengali  in 2012 as Jaaneman, starring Soham Chakraborty and Koel Mallick. and in Kannada in 2014 as Ajith, with chiranjivi Sarja playing the male lead.

The soundtrack for Paiyaa was scored by Yuvan shankar Raja, collaborating with Linguswamy again after Sandacozhi (2005). The audio launch function was held on 12 February 2010 at the Sathyam cinema, chennai which was attended by many prominent film personalities; director Shankar released the soundtrack. The album originally features five songs with vocals by singers Karthik, Benny dayal , Haricharan , Rahul Nambiar and composer Yuvan Shankar Raja himself. Three songs were reportedly composed and recorded in Singapore The lyrics were provided by Na. Muthukumar. The album received highly positive reviews and responses from critics and audiences alike and the songs were considered to have played an important role for the film’s success.Chiru chiru chinukai song lyrics in English is one of the best song of this movie.

Other usefull details of the song are given below.